Young Professional of The Year 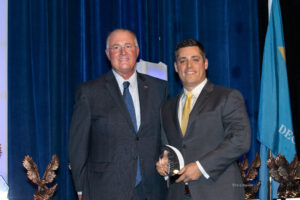 This year’s winner DJ Herr of Wohlsen Construction Company. The award is given to an individual between the age of 18 and 39 who demonstrates strong leadership skills, a strong sense of integrity and a commitment to ABC Delaware through involvement in committees, attendance at events, and company support.

DJ is a regular attendee of ABC events including networking nights, award dinners, jobsite tours and a volunteer worker at our Crab Feast. Beside his participation at ABC, DJ recently completed the 2021 IRONMAN full distance triathlon in Lake Placid, NY. after dedicating two years of his life in training for the event. His fundraising efforts of $5,486 was reached by developing and hosting a hockey tournament. With the money raised, he donated backpacks with school supplies to local children for back to school. DJ is also an accomplished coach currently coaching hockey for kids 12 and under.

As the winner, DJ receives a paid registration to the ABC National Convention in March 2022.